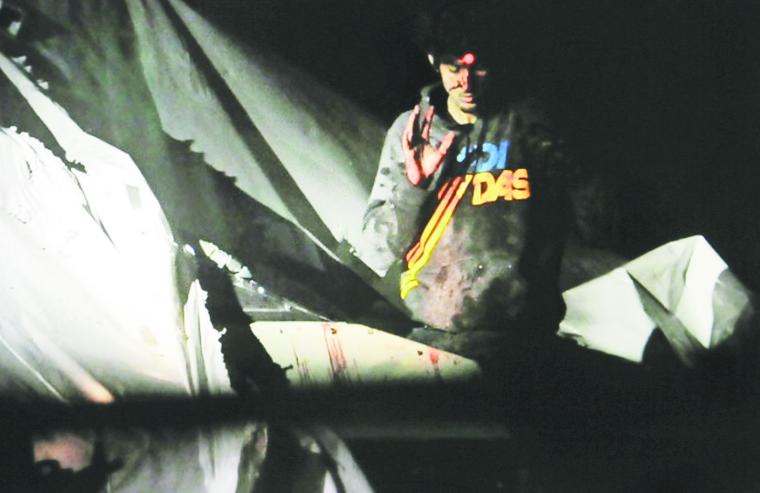 Rolling Stone Boston Marathon Bombing Massachusetts State Police file photo, 19-year-old Boston Marathon bombing suspect Dzhokhar Tsarnaev, bloody and disheveled with the red dot of a rifle laser sight on his forehead, raises his hand from inside a boat at the time of his capture by law enforcement authorities in Watertown, Mass. According to State police spokesman David Procopio, Sgt. Sean Murphy, the state police photographer who released this photo and others of the bloodied Tsarnaev during his capture, retired Nov. 1, 2013, days after internal charges against him were upheld for releasing the images. (AP Photo/Massachusetts State Police, Sean Murphy, File)

At federal court in Boston, defense attorneys for accused Boston Marathon bomber Dzhokhar Tsarnaev will repeatedly refer to an empty chair in hopes of sparing their client’s life as the death penalty terrorism trial continues.

“You try the empty chair. You point the finger at the older brother, who isn’t in the courtroom, and hope it resonates with the jury,” said Michael Coyne, a legal expert, attorney and dean at the Massachusetts School of Law in Andover, explaining the Tsarnaev defense strategy.

“It’s the only card he has to play,” Coyne said. “I didn’t have free will because of the coercive influence of my older brother.”

Whether Tsarnaev participated in the marathon bombing is no longer a question.

“It was him,” defense attorney Judy Clarke said in her blunt opening statement March 4.

Dzhokhar Tsarnaev, who was 19 years old at the time, is alleged to have carried out the acts of terrorism with his 26-year-old brother, Tamerlan Tsarnaev, who was killed in a shootout and getaway attempt a few days after the April 15, 2013, marathon bombing.

“The evidence will not establish and we will not argue that Tamerlan put a gun to Dzhokhar’s head or that he forced him to join in the plan,” said Clarke, who specializes in death penalty cases. “But you will hear evidence about the kind of influence that this older brother had.”

Prosecutors say the Tsarnaevs — ethnic Chechens from Russia who immigrated here with family — were driven by anger over U.S. involvement in wars in Muslim lands.

Facing 30 federal charges, including the murders of a boy, two women and a police officer, Tsarnaev is accused of planting a bomb at the 2013 marathon finish line “to tear people apart and create a bloody spectacle,” said federal prosecutor William Weinreb.

“He believed that he was a soldier in a holy war against Americans,” Weinreb said. “He also believed that by winning that victory, he had taken a step toward reaching paradise,”

Both sides agree that three people were killed and more than 260 others injured when a pair of homemade bombs planted by the Tsarnaev brothers detonated near the finish line of the marathon. Later, Sean Collier, 27, of Somerville, an officer at the Massachusetts Institute of Technology, was found shot to death in his vehicle during the search for the brothers.

Coyne said the defense will try to convince jurors that Tsarnaev was mentally controlled and manipulated by his older brother.

It’s not about his freedom, but rather about his survival.

“That he deserves to be able to spend his life in prison and not die,” Coyne said, as to what defense attorneys want jurors to conclude.

The defense focus will be on “mitigating factors and why his life should be spared.”

Of the 30 charges Tsarnaev faces, 17 carry the death penalty as punishment, Coyne said.

“You have the death of a policeman, death of a child and two women, and the maiming at the finish line,” said Coyne, noting that prosecutors will vividly illustrate for jurors the “nightmare” scene.

“That will resonate with them as the case goes forward,” said Coyne, who is providing ongoing legal commentary on the trial to New England Cable News and USA Today.

Prosecution witnesses, marathon bombing victims, witnesses and relatives testified this week, but the defense is not cross-examining them.

By introducing the older brother’s alleged influence, the defense is clearly trying to get a jump on a death penalty phase of the trial, Faigel said.

“They are not asking questions of witnesses and admitted to Tsarnaev’s guilt because they want the jury to believe them and trust them when the case turns to whether the death penalty should be applied,” said Donovan, a former N.H. senior assistant attorney general in the homicide unit said. “No ground can be gained by questioning victims of this atrocity. It can only inflame and prejudice the jury against anything else the defense would try to do.”

Donovan predicted the defense will become “more active” at trial “once the victims’ stories are all told, and they have an opportunity to question law enforcement about the defendant’s state of mind and the older brother’s activities.”

John Morris, a criminal defense attorney and bar advocate in Essex County, said the defense will need to show a “quantitative” analysis or evaluation “of the factors that persuaded him to follow his brother’s advice.”

“They’ve got him,” Morris said of Tsarnaev’s participation in the crime.

“They need to show the tie between the brothers and the mind control,” Morris said. “I’m not sure it will work but they are trying.”

In death penalty cases, Coyne said jurors always struggle with doubts about the guilt of the accused.

“That question has now been removed,” he said.

The Tsarnaev trial is the most closely watched terrorism trial in the U.S. since the Oklahoma City bombings in the mid-1990s.

The “empty chair” defense is an “established and accomplished tactic,” Coyne said.

However, he added, the Tsarnaev trial is anything but a textbook case.

“If this isn’t a case that cries out for the death penalty, there isn’t one,” he said.

Material from the Associated Press was used in this report. Follow staff reporter Jill Harmacinski on Twitter @EagleTribJill.